From a very young age I suffered from a severe and persistent ear infection, which left me partially deaf. In my early 30’s I decided to seek medical advice. I was told that I would have to wear a hearing aid and as I grew older, my condition would deteriorate leaving me totally deaf.

Two years later I went to a tent crusade at the Piece Hall in Halifax. I asked the Lord to heal my ears but nothing happened that evening. The following morning when I got out of bed I heard what sounded like a thousand birds chirping. I then realised, to the glory of the Lord, that He had done the impossible by restoring my hearing. I was able to hear the noise of the traffic, people walking, chatting and even took part in conversations.

In January 2003, I was admitted to the Calderdale Royal Hospital, Halifax suffering from a very severe form of pneumonia. This resulted in a total shut down of my hearing. Although I was very ill, I sensed that the Lord wanted me to minister to one of His precious children which, by His grace, I did. Four weeks later that child of God went to be with the Lord.

After several hospital appointments and hearing tests, I was given the option of either wearing a hearing aid or having grommets put in. I opted for the hearing aid.

In August 2004, I had another severe ear infection leaving me without any sense of hearing. I took the decision not to visit my G.P. but rather stand on the Word of God in James 5:14-15 for my healing. A friend of mine had earlier on introduced me to the Healing Rooms of Halifax. I was excited because I never knew that Halifax had such a blessed place.

My first and second visit to the Healing Rooms was amazing and many miracles happened in my life and that of my family. On one of my visits in August, I requested prayer for the healing of my ears, which the Healing team did. On my second visit I realised that there had been considerable improvement with my hearing. The Healing Rooms team prayed again for my total healing.

The next morning whilst I was still asleep, I felt I could hear my neighbour’s dog barking so I woke up to listen. To my surprise all the double glazed windows in the house were shut so there was no chance of hearing any kind of sound from outside.

During the day I realised I could hear the sound of my washing machine and TV without increasing the volume. God has turned my life around for the better in such a way that I can now hear far better and has made my physically and spiritually stronger in Him.

I give Him all the glory for the great things He has done and continues to do in my life. 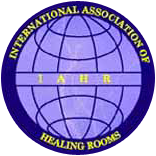